I thought I would re-post this Tribute to Dave Battison a fellow ski coach, Wax room buddy, BCDS coaching partner and Friend. CCC has done a great job of summing up Dave’s contributions to our sport. Dave was a pleasure to work with over the years. We will Miss you. Adam 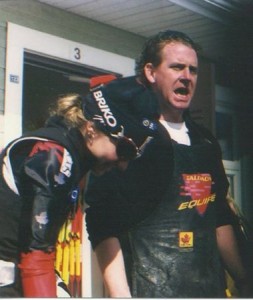 Refer to the CCC website for the complete article and additional photos: http://www.cccski.com/Media/In-the-News/Tribute-to-Dave-Battison.aspx#.U6CcbW_jgaI

It is with deep sadness that Cross Country Canada announces the unexpected passing of Dave Battison, long-time coach and contributor to Cross country Canada. CCC extends condolences to Dave’s wife Laura, his family, friends, the Strathcona Nordic Ski Club and all of his numerous associates in our ski community.
Dave worked as a professional coach for over 20 years. He started his career in 1991 with the Laurentian Ski Club. He also went on to coach the Laurentian University Nordic team for 4 years at time when Laurentian Nordic was one of the powerhouses in the country and Laurentian University won several OUAA championships under his coaching.  He took his coaching skills to western Canada, where as Head Coach of the Rocky Mountain Racers from 2001-2004, he garnered 18 national championship medals. From there Dave’s career took him to Vancouver Island where he became Head Coach of the Strathcona Nordics Ski club in Mount Washington from 2005-2014.

Dave has a long list of achievements both at the division and national level both as a coach and wax technician. This included extensive service with the National Ski Team at multiple World Junior Championships held in Germany, Sweden, Norway and France as well as assisting at numerous national junior training camps. In 2009 he was Head Coach of Canada’s Nordic team at the World University Games in China and again in 2013 in Italy. Dave received an NCCP National Coaching – Coach Developer Award sponsored by Investors Group, an award for the development of coaches in the community.

Dave wasn’t a coach without being an athlete first!  He competed as a professional Triathlete, representing Canada three times at the World Ironman Championships in Hawaii.  During those years he also competed in the Canadian Long Course Triathlon (swimming, biking and running) and was the “National Champion”. In the same year he competed in the Penticton Ironman, where he won the “Amateur Champion” in the age group 25 – 29.   After this period of time Dave became a professional Triathlete under various contracts.

Dave inspired many local skiers in so many ways; he was a very keen coach, always willing to help athletes and other coaches. Dave leaves a legacy in Sudbury, Canmore, Mt. Washington and across our country of skiers and friends who today cover all aspects of our ski community including racing, grooming, coaching and officiating.