We did all that Testing at the Apple Bowl last week and now I have finally processed all of the results. It was good to see some Biathletes doing the test too. If you want more information about the tests it can be found under the “Athlete’s Resources” Tab including past results. Strength and Critical Speed. At the end of the day Why do we do all of this?

To benchmark improvements and motivate you the skier to work hard and become stronger and faster.

The NST Strength Test is a simple Test of 5 exercises over 10 minutes. One is given a minute to complete as many of each exercises as they can in 1 minute. They are then given 1 minute break before starting the next exercise. Pullups, Sittups, Pushups,  16? Box Jumps and Dips (feet elevated) in that order. Complete Detailed Rules can be found Here: NSTstrengthTestProtocol-and-benchmarks2011 or Here for PDF: NSTstrength-test-protocol-and-benchmarks2011

Each Exercise has Standards to meet at each age:

These Tests are Standardized and created by Cross Country Canada. The Critical Speed portion of the test is the theoretical pace in Meters a Minute at Anaerobic Threshold. This is not entirely accurate since some times a runner will run faster on both tests nut not improve their critical speed because of how it is calculated. The Times are actually more important. Despite this when most runners get older they tend to improve in a exponential fashion during the Teens but the standards are linear so if you are no where near the standard then don’t panic too much. This Sept 2015 results are in the Green Column. If you have a time which reads October that is October of 2014. The Speed Standards are shown in Red. Click on Image to enlarge. 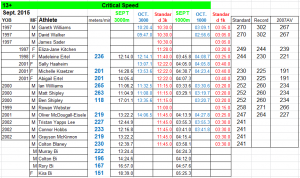 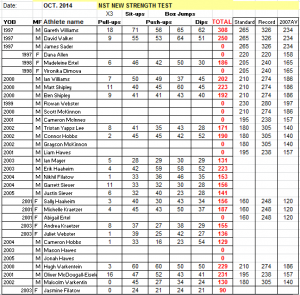 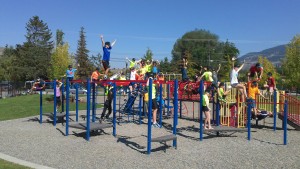 END_OF_DOCUMENT_TOKEN_TO_BE_REPLACED

12:00 pm Skate Coaching Clinic
Skate Coaching Clinic
Oct 24 @ 12:00 pm
Parents Only
Roller Skis Glenrosa Middle School Moving from Good to Great! Hello Coaches, This is another opportunity to develop your coaching skills. We will begin by discussing the key point from the 5 Videos and the...