After a coaches meeting this weekend it was decided that we would change our groups, allowing smaller groups (with a lower athletes to coach ratio), and athletes to be in groups of similar age and ability.

Here is the breakdown

JD – Junior Development is the progression from ski league into the next level of Skills Development. This program is led by the clubs best coaches including our Club Head Coach. This group will be further be broken down into 2 groups based on ability once we are on snow.  There will usually be two practices per week.

Deepa Filatow will be the coordinator for this group.

Telemark Racers are Dividing up Again. The Guide for the Selection Criteria for the Three different groups of Telemark Racers is HERE!  TR2, TR1 and TJR 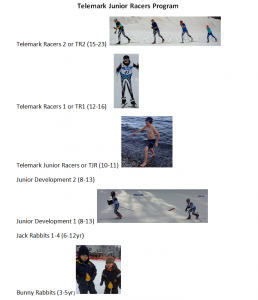 TJR – Telemark Junior Racers is for those skiers who have raced in the previous season.  There will often be three practices per week. Some in conjunction with the TR1s. Above ages are guidelines. Please Refer to Coach Adam and the Criteria.

TR1 – For those who have raced in the previous season and meet the following criteria.  This is the same criteria we have used in the past.  There will usually be three practices per week (typical age 12+).

Paul Shipley and Ross McKinnon will be the coordinators for these two groups.

Any questions about which group an athlete is best suited for should be directed to Adam Elliot the club’s head coach.