Last weekend we had a few people asking if the Westerns in PG was going to be part of the BC Cup Aggregate Championship. The answer is Yes. It has always been part of this year’s championship. No it is not because of the problems at BC Cup 1 in Sovereign Lakes. It is true that if you want the best chance of a good result in the championship you may want to travel and race in Prince George at the Western Canadian Championship/Northern CUP.

Here is the information:

AGGREGATE AWARDS FOR THE OVERALL TECK BC CUP SERIES Aggregate awards are provided to the first three finishers for each year of birth from the Pee Wee category through to Junior Boy/Girl (i.e. Midget Boys, Midget Girls, Juvenile Boys, etc.), and for each age category from Junior Men/Women through Masters 70+ Men/Women. There are no aggregate awards for the Atoms category. Scores are earned from the six individual events in the BC Cup Series – the interval start (3), mass start (1), and individual sprint (2) races, plus two of the individual events at the Western Canadian Championships (Northern Cup #3 & 4 races on February 20-21, 2016). Relays are not included in the overall awards calculations. A competitor must compete in at least FIVE events to be eligible for the overall awards. The winner will be determined by points from the competitor’s FIVE best (of a possible EIGHT) races. A minimum of TWO classic and TWO free technique events must be included among the five events selected to determine the points. A competitor is not required to compete in the BC Championships in order to win the overall awards. Points for the Aggregate Awards will be awarded in each class as follows:

1. Points will be taken from the best results from a maximum of five races.

2. Points are calculated for BC residents only.

3. In the case of a tie, where the total points are the same, the winner will be determined by the results of those races in which both skiers competed. If there is still a tie, a tie will be declared.

4. It is not necessary to compete in the BC Championships to win an overall BC Cup title.

Kari Bailey is planning on driving up in her Van with Michelle so if you need a ride contact her please. 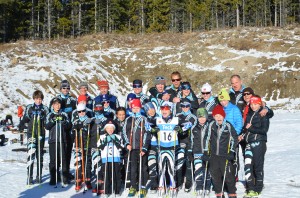