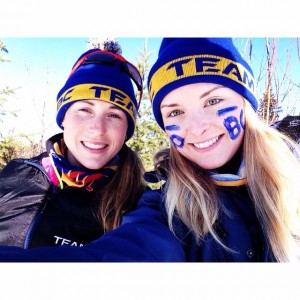 Emily Weekes (Telemark Nordic Club, Kelowna) remembers exactly what it was like the first time she clipped into cross country skis. That was just 13 months ago. Now, not only is the 24-year old more comfortable on skis, but she’s now training with the National Para-Nordic Team. “Unbelievable journey. It’s gone so fast, and slightly overwhelming,” she said.

“In Emily’s case, she was a true competitor, and we can convert that type of competitive nature and an athlete into a skier,” said Para-Nordic National Ski Team head coach Robin McKeever.

The reason Weekes was late arriving on the cross country ski scene, is because her first passion was wrestling. That was until an training accident in 2009 left her with nerve damage in her right arm.

“Wrestling was my life, and I didn’t really know what to do outside of wrestling,” said Weekes. “Now, my third addiction has come.”

And while she’s following a different road to get there, her athletic dream is still alive and well.

“My goal for wrestling was for the Olympics. It was for 2016. And so now to have a second chance, even though it’s not able-bodied and it’s not wrestling,” she said. “It’s a lot of catch up, but it’s really exciting.”

The Paralympics are in Pyeongchang in 2018, and Weekes plans on being there representing her country.